the one with the mulfi

The one with the mulfi

As monsoon lashes against the Kerala coast, and rains creep up the sub-continent following their usual trail, I decide that I too in my fashion must address the Indian obsession with the mango. Clichéd it is, of course; bordering on oral fixation, true; but, well, cultures perhaps owe it to themselves somewhat to live up to their stereotypes, especially if said stereotypes were first generated-for and subsequently were seen-through-and-analyzed-as-thus-by goras.
Ergo, the mango.
Or rather, if we were to go with the flow, the magical mangoes from Dharamtallah, which played a critical role in pushing me from one side of the blogosphere (foodporn-viewing) to the other (foodporn-contributing or whatever). But long before these magical mangoes, came the train journeys to Howrah, at the end of the summer holidays. So that is where the story really begins.
Every June, when Mummy would return to Calcutta from the glorious environs of what is now Jharkhand, she would be accompanied, alongside a scrawny child (me), by several baskets bursting with fresh vegetables and fruits, several gunny sacks full of rice grown on my grandfather’s land, several bags stuffed with local delicacies – I remember a particularly delicious home-made snack called jhilkut – and several canvas thailas full of sundry other items that, like the rest, were far superior to any Bengal produce, sweetened as they were by the quaint properties of the Jharkhand water-table. I might be exaggerating slightly – but that, more or less, was the general picture. Co-travellers were no problem. They were won over with mountains of food that my grandmother would pack as though for a troop of soldiers going to Siachen, and if I remember correctly, some of them even went home with a few goody bags of choice vegetables.
My father, who is somewhat of a posh sort, would be most annoyed at the spectacle we presented at Howrah. But he would have no choice but to stuff it all into our creaky fiat premier padmini.
These days, when I return from Calcutta, my mother clamouringly packs a massive quantity of stuff for us. Mostly I put up with it. Believe me, it is far easier to just go with it than explain otherwise to her. Earlier this month, for instance, I ended up paying through my nose at the excess baggage counter. But yes, the five kilos of gobindo bhog rice she had packed was comforting; it is, after all, supremely expensive in Delhi. 70 rupees a kilo! (No, no, don’t do the math. Apparently, the excess baggage does not count; she has even offered to return it to me.) And the magical himsagar mangoes of Dharamtallah do not even fall into this category: they cannot be had in Delhi for love or money.  The spouse was not amused.
With the last of the above mangoes, I decide, extremely uncharacteristically I’ll have you know, to do something special. Mango kulfi did seem appropriate, but I was faced with a couple of problems: I had neither my usual recipe (that had been twice tried, with mixed results) nor kulfi moulds. The consequences of moving in and out of cities with random casualness – one part of one’s worldly baggage is always elsewhere.
However, my Julie Sahni classic cookbook – Classic Indian Vegetarian Cookery – suggested that muffin moulds might just as easily be used, a possibility that appealed for its sheer quirkiness. And Julie Sahni’s recipe, you would have guessed from all the tautology, was a classic. So there was no need for condensed milk, evaporated milk, cornflour, milk powder or even whipping cream. One only needed a litre of regular milk (I acquired two packets of full-cream from Mother Dairy) and a dash of nutmeg powder, preferably freshly grated, and some sugar. The mangoes, you would recall, I already had.
In the traditional mode, I sliced off the tops and soaked them in water for half an hour. 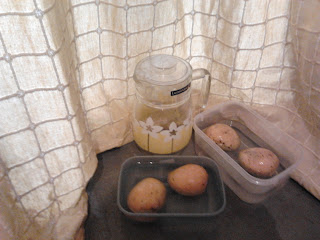 According to Sahni, “It is the slow cooking of the milk that imparts that distinct characteristic rabadi aroma only classic kulfi has. Also, because the milk mixture is frozen without being churned, the kulfi develops a special grainy texture not unlike that of Middle Eastern halwa, something between ice-cream and sherbet.”
Luckily, electricity in my Council House-ish kitchen is subsidized, so I could guiltlessly thicken the milk slowly, on my non-traditional induction cooker. Simmering the litre after it reached boiling point, and continuously stirring it (well, okay, one is ideally supposed to stir it constantly – I did my best) I achieved a rather aromatic slightly-coddled creamy-texture result, sweetened slightly. To that was added the mango puree, the dash of nutmeg, and subsequently, in clingfilm-lined muffin moulds, it was frozen inside generous aluminium foil packets.
It was delicious, even if I say so myself. The mulfi.

1. Bring the milk to boil over high heat, stirring constantly to make sure no skin forms (as that shall deter evaporation). Subsequently, lower the temperature to medium and cook the milk, gently bubbling and boiling, until it is reduced to 400 ml. Stir often so the milk does not stick or burn. Add the sugar and cool thoroughly.
2. Fold in the nutmeg and mango pulp.
3. Pour into kulfi moulds (or, at a pinch, muffin tins lined with cling-film and covered with aluminium foil) and freeze.
4. Unfreeze and devour.

Notes: As someone with no culinary sense of proportions I did splash the thickened milk around in my measuring cup once or twice in between to check if it was thickened enough. Though it’s a bit of a dangerous process, I would recommend it.
It is important to keep stirring regularly if not continuously. The last time I’d attempted it, the milk for the kulfi had got slightly burnt – and though my Russian gourmet-cook friend, the unfortunate one sampling it, said making it “smoky” was a good French twist – it is a situation that is not easily rectifiable.
It tastes far superior (at least to my untrained palate) to the recipes that use condensed milk, evaporated milk, cornflour, whipping cream  etc.
Finally, point 4 does not take from Sahni’s book. But works pretty well. 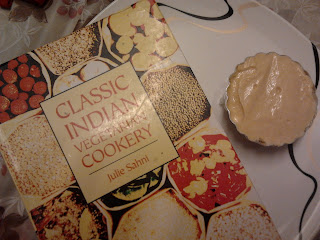 Posted by devapriyaroy at 11:59 No comments:

the one with late reminiscences of summer


Unfortunately, as one who is still working on a manuscript that was to have been completed and submitted last year (or was it the year before?), I cannot really complain about the heat in Delhi. If anything, it is forcing me to remain indoors, undistracted by the pleasures of gallivanting here or there and get my ass moving on what is, with ironical aptness, called “The Heat and Dust Project”.
The afternoons outside our tiny flat are filled with the solid quiet intense white-heat that stands like a handsome asura, the guardian of the Delhi summer; the neighbourhood dogs rush about busily in the sun with a frenzy that is part sexual. There is a water booth for them where they mill around at lunchtime, bossing over the thirsty mynas who wait patiently in queue; and then, suddenly, they vanish. To sleep beneath the green benches, stretch under limpid shadows by the mini-forests that intervene our campus.  But dusk is long and lazy and by the time the dogs are roused and heard barking again, the four neem trees outside our Council Housish block – where the Cornell-red brick façade has been leached to a dull gentle redwood by the years in extreme temperatures –  the four neem trees that cast their shadows on our walls go shee shee shee. 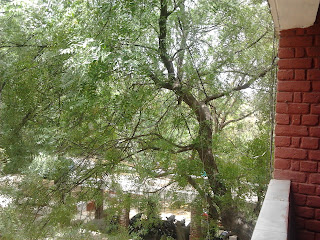 Sometimes in the late afternoon, there is a lull when the sky seems to darken. The peacocks call out to each other. The neem trees sway their branches madly in the wind.
But mostly one is disappointed – there comes but a brief spell of rain.

When I was a girl my mother and aunts would assemble at my grandparents’ country house in Jharkhand for the summer holidays. In hindsight I know those were probably the happiest holidays possible for a child, though at the time I used to be extremely jealous of my quintessentially Bengali friends who, ably carrying the mantle of Bengal’s famed wanderlust, went on fancy holidays to exotic locations. My Bihari (now Jharkhandi) parents, au contraire, would pine for the smell of the reddish lands they had grown up in, the unique green of its landscape, the sweetness of its water.
My days on holiday would begin with homework (in that matter, my mother combined the worst of Bengali and Bihari strictures) and a glass of fresh cow’s milk. I hated both with passion. But then, after a while, I would be let off – and then I would spend the entire day roaming in the sun with my holiday best-friends, local girls who knew every nook and cranny of the valley behind the house that led to a large pond and then, further away, to hills. But we were not allowed to venture that far, to any place really interesting.  So we would walk about aimlessly, laugh and gossip, collect small ripe mangoes in handkerchiefs, bite them at the top, and then suck the juice. We would visit neighbours. We would laze. I would lose all my citifications and relax into bliss.
After a few days, my usual impulse of over-reaching would rear its head, and my friends and I would decide we should stage an entertainment for the benefit of our families and sundry others – mostly my grandfather’s tribal friends, associates and lackeys – who might want to drop by. I would usually be the director. My friend Jyoti would be the chief star. If my youngest aunt’s daughter was visiting too, then there would most definitely be another rival director. The stage would be the inside red verandah of the house that led to the yard. The audience would sit in the yard, the actors would grace the verandah, my grandmother’s best bedsheets would be the curtains, and my eldest cousin R’s tape recorder would provide filler music. (The songs from “Phir Teri Kaahaani Yaad Aayi” were the rage one summer I remember.) The local bank manager’s wife was the guest of honour. There was a play (my piece de resistance), some Bollywood dancing (Jyoti’s piece de resistance) and some Rabindra nritya (the rival director’s piece de resistance).
And then the summer holidays would end and we would travel all evening to take the train from Ranchi at night, eat luchi and potato curry in our compartments, and in the morning, reach Howrah almost alongside the monsoon. My heart would expand slightly at the sight of the gracious red buildings of Howrah station, and my father waiting for us.

These days I realize what it was that made summer so special those years. For summer was about my mother and aunts becoming girls again, at their parents’, a peculiar condition that I cannot explain – but which I always slip into myself when I visit my Mum. But there was something about the voice, the step, the telling of sorrows, the discussing of futures, the unique mix of tensions and joy. It has been long since I have been able to fashion that long languorous sense of happiness out of my now adult summers.

The town remains; the house remains against the backdrop of Maoist realities; May and June come and go; my grandparents are now gone, though in my mind they remain inextricably linked to still summer afternoons and my theories of joy.

Posted by devapriyaroy at 11:52 No comments: