or why the spouse, though kindly, is lying
Now, I am turning 27 tomorrow; apparently it’s the new 17, the spouse assures me. And apparently, heat and dust rules are suspended on the morrow, and I am allowed to spend on something completely unnecessary in its scheme. Except, I am always a little suspicious when he says that. He has other ways of getting back – but that is not the first thing on my mind tonight.
I am not going to be 26 any longer; what can I say, I will miss it. It was a good age.
Being in Rishikesh, though, happily offers me a very good turning-over-yet-another-new-leaf symbol - and don't mistake me,  but I love the faddishness that symbols imply. A dip in the Ganga, thereby, expiating the sins of not just the last 27 years but the last 27 lives possibly. It’s probably a good start.
* 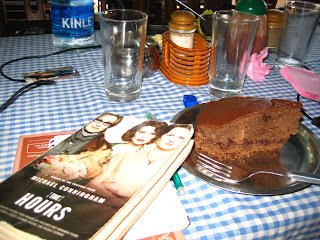 As I nibble my pre-birthday slice of cake, I indulge in nostalgia:
When I was a kid, my mother threw me great birthdays. My friends from the school bus were invited; though the cake was never store-bought she always fashioned what I requested – say, I wanted a rabbit, I’d get a rabbit; she would cook a fabulous array with my grandmums and aunts and once, even made ice-cream ffrom scratch for everybody. There was always room in the neighbours’ refrigerators during birthdays and stuff.
Of course, being born in May, I never had the whole celebrating-your-birthday-in-the-school gig. The summer holidays would intervene. You went to class in what was called “colour dress” with a packet of sweets to distribute and the teachers would be very nice to you and not mention your spelling. Then, in one of the classes after recess you coyly went up to the teacher and asked to be excused so that you could go around school giving two sweets (from the pile remaining after each classmate had been given two as well) to other teachers. You were permitted to go – and wait for it, that’s not all – your best friend could go with you, to carry the bag, and  to generally be helpful and sakhilike.

That was the best part – you just roamed around the campus, interrupting other people’s classes and smiling sweetly as you handed out the two sweets. Some teachers complimented your dress, and ever since that moment, you always loved them. One year, I remember, I got really lucky – not only did I go once with my best friend Joyeeta, as the Class President (believe me, I'm not proud of this phase of my life) also with the new girl who had no best friend yet.
Then when we became teenagers, we would celebrate birthdays with more exclusivity; the best girlfriends would spend the day at home, chattering and drinking iced lemonade while the sun spewed gold over the grey Calcutta streets and trees, and ah, the sweetness of those long long afternoons. We were still so desperate to add on years to our total. And see, that’s why, 27 cannot be the new 17. At 17, I was desperate to jump a year, become 18, embrace adulthood, Baywatch and the vote all at once.

And that's the difference between then and now – I am definitely not going to want to turn 28 a day sooner than I have to.So there it is, the truth.
Of course, I know I know this obsession with numbers is meaningless, and life is all about cyclicity and fullness – not linear progression – yada yada yada – but hell, I know I’d be lying through my teeth if I pretended I like 28 more than 27.
And therefore, the wise conclusion: the spouse, though kindly, is lying. 27 is the new 27. And that is precisely why I am going to use the prerogative of adulthood and buy something useless to celebrate it!
Posted by devapriyaroy at 11:08